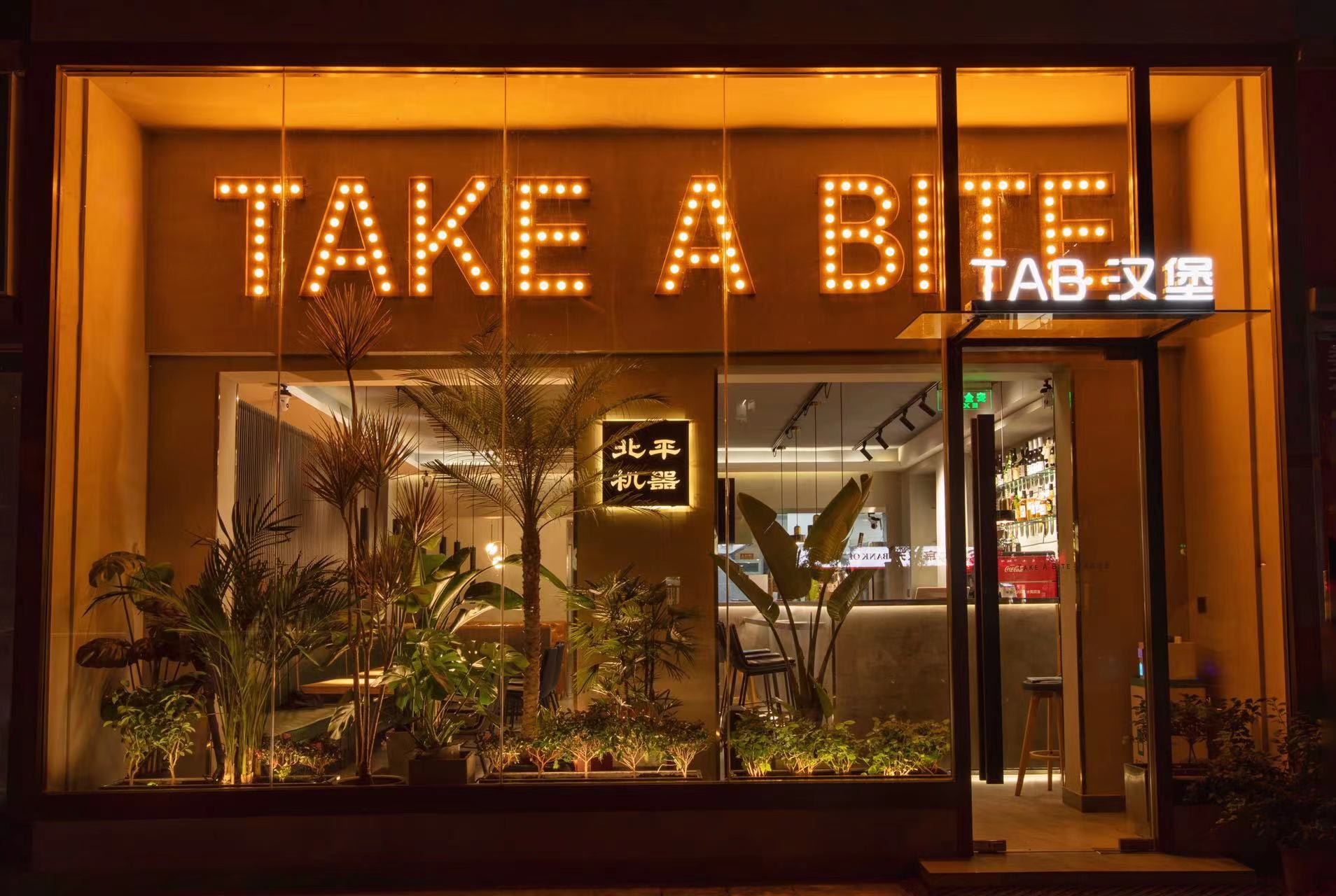 Take A Bite (or simply TAB) has been the restaurant that keeps popping up on my Dazhong feed as well as my food delivery service apps (such as Meituan and ELeMe). However, since I try to eat “healthier” at home, I rarely give myself the opportunity to order a burger.

Besides, I think burgers always taste better when freshly made at the restaurant anyway. Unless you’re McDonald’s or KFC, burgers just aren’t the same after they’ve taken the journey from the restaurant’s kitchen to your home.

Then, on a fateful day, as I was in a taxi headed to 798 to hang out with a friend, a store front caught my eye. To be exact, the big letters TAKE A BITE lit up like a sign in Vegas, caught my eye. That was the restaurant!

Mixed among a street packed with little stores, its stands right in between a pharmacy and a printshop. It’s hard not to notice the restaurant as its fun, modern and somewhat tropical style very much stands out on the street, even in broad day light. Well, I suppose this was my calling to pay the burger shop a visit! So, when my friend began asking where we should go for dinner afterwards, I had just the perfect spot in mind. 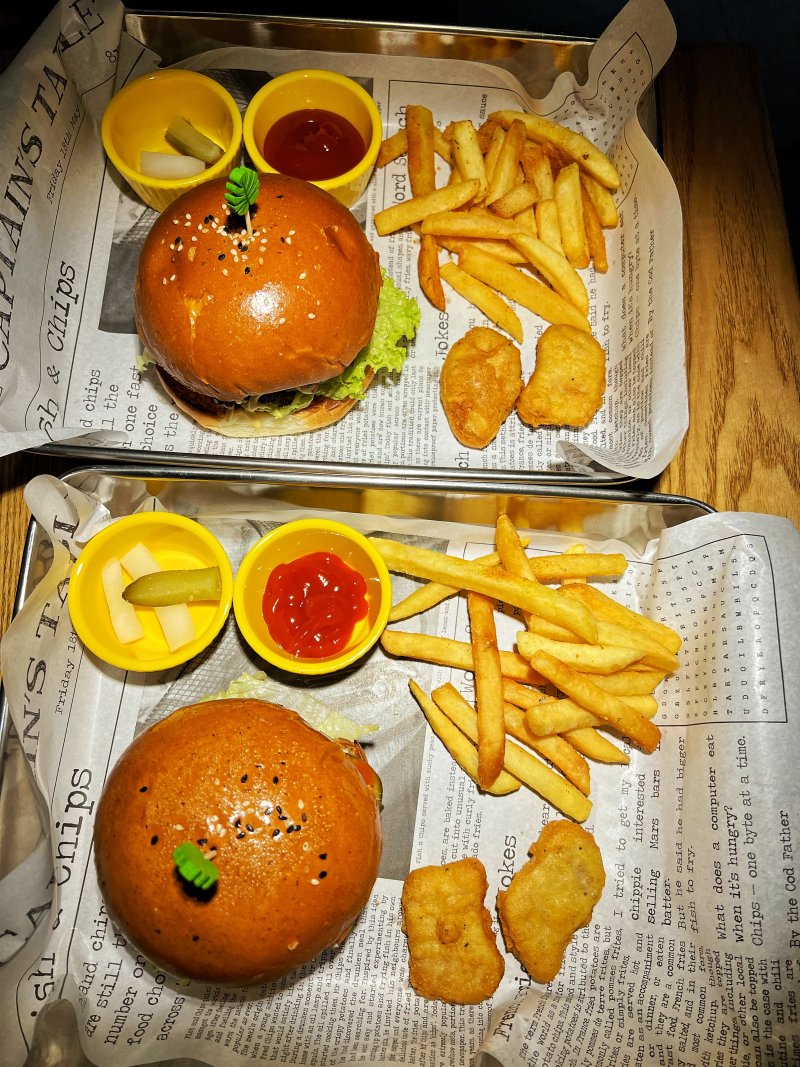 By the time we got there for dinner, well, let’s just say the TAKE A BITE sign shines brighter than ever when the sun is outta the way. You definitely won’t be able to miss it even if you wanted to. Upon walking in, I was quite surprised by the no-frills interior as I expected something a bit funkier based on the exterior. Instead, the restaurant’s design is quite simple and to the point.

A row of wooden tables matched with black chairs and dark green sofas on the left and the bar on the right. Hanging on the wall between the two rows is a television playing none other than the legendary cartoon - Sponge Bob Square Pants. I couldn’t say I was surprised when I saw a burger called Sponge Bob Pineapple House on the menu. Hmmm, suppose this also explains the tropical plants displayed by the windows… 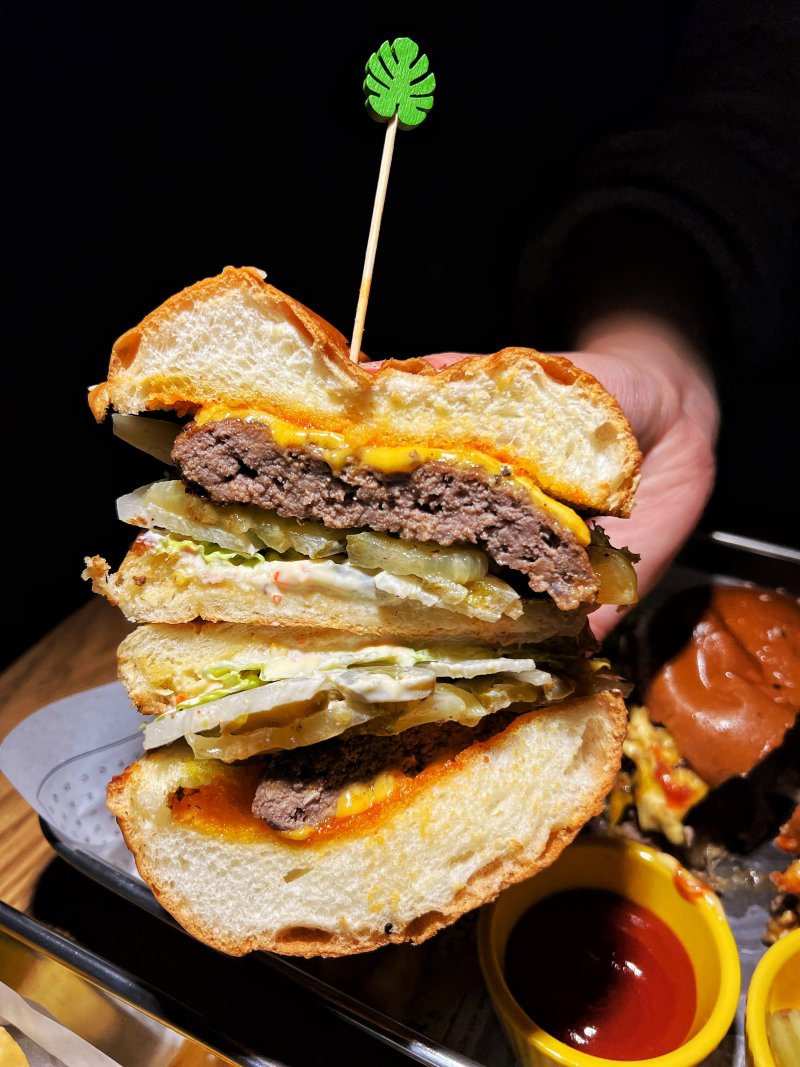 Now to the main focus of the evening – BURGERS!

As mentioned earlier, the Sponge Bob Pineapple House definitely stood out to me. It’s your regular burger with buttered pineapple, which honestly sounds quite delicious as it reminds me of a brunch burger I always have at an Australian restaurant (Ruby’s!) in NYC. But perhaps it’s not for everybody because in a way, it also sounds like the Hawaiian pizza of burgers.

Anyhow, I was craving something a bit more savory, so I decided to save Sponge Bob for my next visit. Burning In Hell was my final choice and my friend ordered the Double Double Meat Supreme. The burgers both came in a little tray with fries and nuggets on the side.

Yes, this burger is meant to be caliente! But fear not, it’s actually not that spicy. It’s your classic burger with kimchi and jalapeño added on top and poured over with a homemade secret chili sauce (which I assume is some sort of sauce mixed with Chinese chili because it’s got that Szechuan flare). The sweet, sour and spiciness of the kimchi and jalapeño definitely added a special kick to the burger while the special sauce added a hint of that classic Chinese pepper aroma. However, since the burger is called Burning In Hell, I do wish that the spiciness could be elevated a bit more (but then again I’m pretty 重口味 zhòng kǒu wèi aka into hardcore flavors). The best part of the burger though, is still its patty. 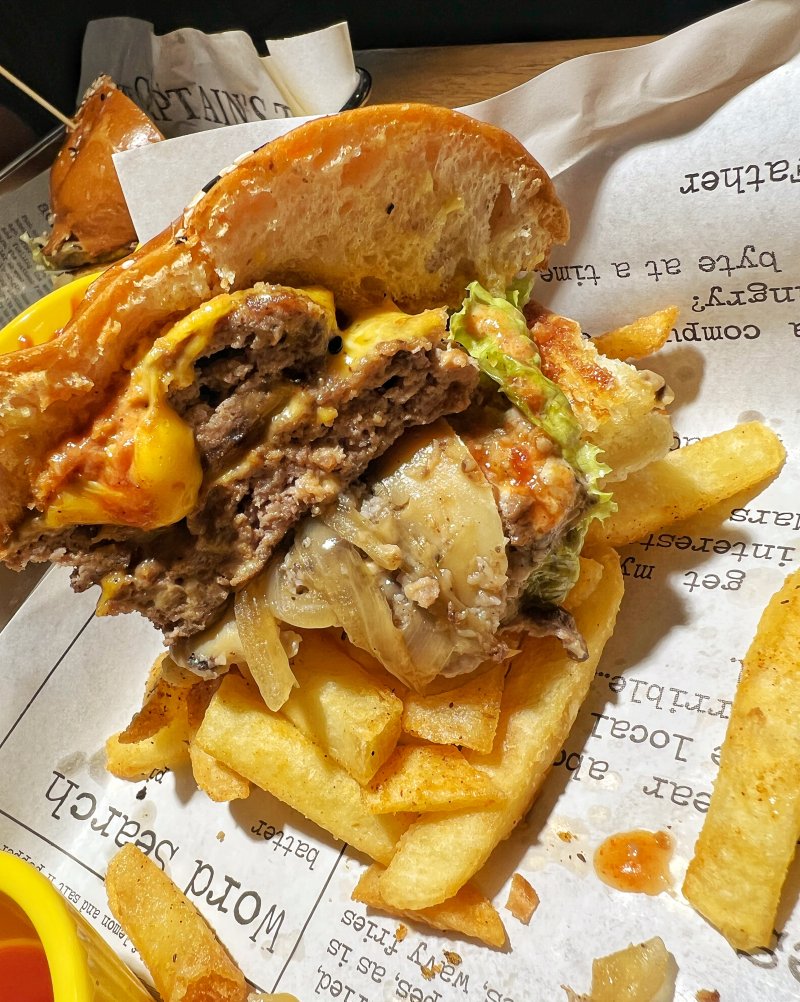 You can tell that the quality of the meat is great when you bite into it and have that beef aroma just come spreading up your nose and across your palate. Seriously, thinking about that bite just makes my mouth water. I’d say, this is quite a successful East meets West burger that I would recommend.

I mean double the meat, double the deliciousness, right? Although I am often tempted to order a double patty burger, I usually opt for something else because I’m afraid it would be too much. Thank god my friend ordered this one (we split the two burgers so we each got to have a taste of the other’s), otherwise I would have missed out on the opportunity to eat this one heck of a beautiful burger. Like oh man, the burger appeared before us thick, sexy and juicy.

The cheese was trickling down as we split the burger in half. Ugh, gorgeous. The meat quality in each of the burgers is obviously the same, so this was basically double the flavor and aroma of how I described the patty in Burning In Hell. Chewing into two layers of meat is definitely a different experience as well – with each chew, the meat just becomes tastier and tastier. 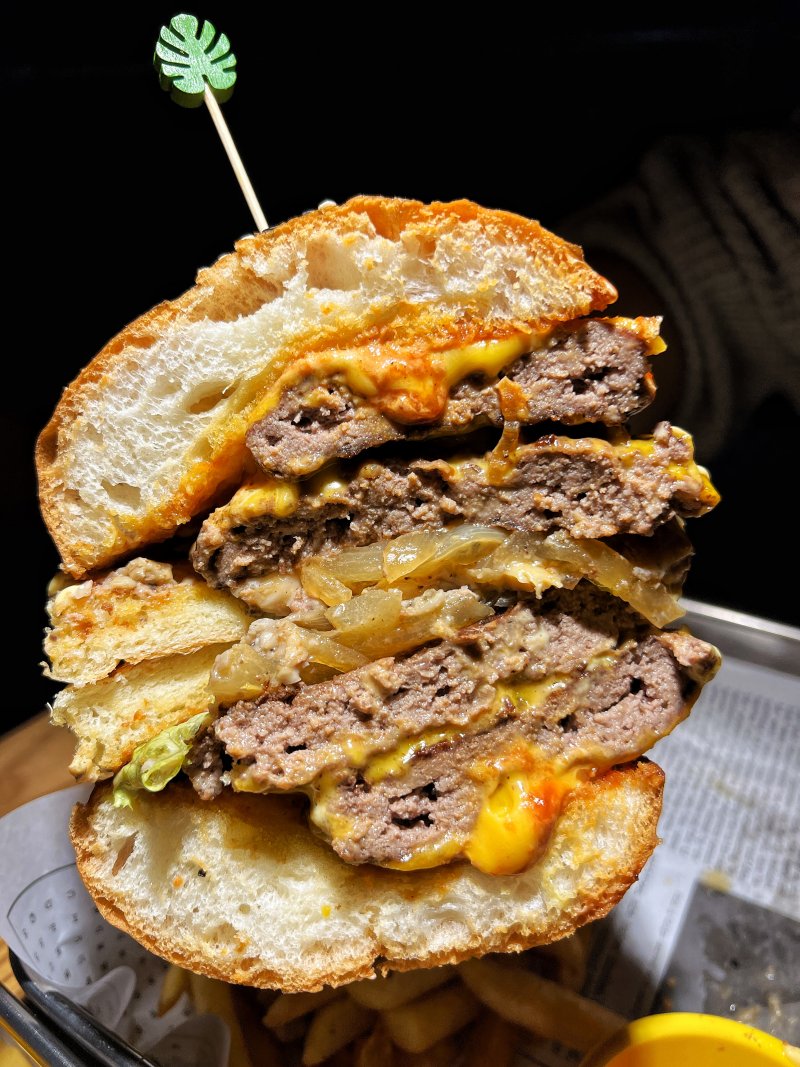 After our meal, my friend and I sat there, rendered completely useless as we were stuffed by the burgers. I’m glad I was able to check this place out and would definitely come back for more. I’m still very curious about the Szechuan Style Suicide, which is a spicy fried chicken sandwich. I would’ve ordered this one, but it was unfortunately not available that day. They also have a Montreal Cozy Poutine (apparently the owner used to live in Canada) which I’m dying to try because I haven’t had a good poutine in forever (hopefully theirs would be as tasty as their burgers).

With so many well-established burger joints in Beijing, TAB definitely stands out among the competition. So if you’re around the 798 area and are looking for some good ol’ burgers, I would highly recommend giving TAKE A BITE a shot! Hopefully, your experience will be just as good as mine!