18++ "This was my first time reading Romy Lockhart and all I can say is SOLD!!! Her unique take on the shifter world is beyond phenomenal! I love this RH paranormal world that she has created of hybrid shifters, fated mates, rejected mates, magic users and of course all the little nuisances it entitles when your throw amazing plots, well created characters and off the charts chemistry and drama into the mix." Jennifer, Goodreads 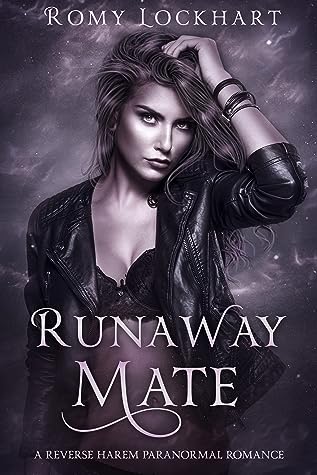 Description:
Jillian is ecstatic when she finds out she’s become more than a wolf shifter. The instinct she’s always had that she was meant for something different is validated when a gator-bite turns her into a hybrid shifter with two distinct animal forms.
Her parents are the opposite of thrilled, and plot to have her gator exorcised before it can fully emerge. She’s been promised to the Alpha’s son, and he won’t accept a hybrid.
She does the only thing she can. She runs.
Her new animal form skews her senses when she goes into heat and every gator shifter she comes across looks like an appealing option.
Are the guys she just met the mates she’s truly meant for, or are they destined to break her heart?
Runaway Mate is a standalone new adult fated mates reverse harem romance with college-aged characters, serious steam and an HEA.
EXCERPT
Despite feeling like I could easily spend the night staring at the ceiling, I eventually pass out. The bed’s really comfortable and everything that happened in the last couple of days caught up to me with a vengeance. I wake up to sunlight streaming through the drapes.
I stretch as I get up, looking around the small but comfy room and feeling kind of sad that I’m going to have to leave. I like it here. Of course I do. It was given to me without conditions or questions by a sweet-hearted guy who just wanted to help the crazy naked girl who walked into his gas station.
If I hadn’t been overly forward with his friend, maybe I’d have gotten the chance to know them both better. Maybe something would have happened with one of them, or maybe we’re only meant to be friends. I guess I’ll never know now.
Why is it so damn hard to avoid flirting with hot guys?
I have zero self control, and absolutely no hope of finding some.
It’s not like it grows on trees.
I yawn as I head for the shower.
The guys won’t be around until later. I can just clean myself up and get moving. I’ll leave the key at the shop. I’ll just have to be more careful from now on. No more abandoning clothes. I’m human until someone else takes pity on me. I’ll just have to hope the next person who does that isn’t a hot boy who isn’t interested in entertaining a horny stranger.
I dress in the clothes Phoenix gave me. They smell faintly of him, and I like that. The sweatpants are small enough not to hang too low at my hips, but I have to roll the bottoms up a little which doesn’t surprise me. He’s tall, so his pants are long. I walk around a little in the sliders. They’re definitely too big but if I shuffle along at a snail’s pace they’ll stop my feet from getting all scratched up.
There are a couple T-shirts left in the canvas bag, alongside a couple bottles of water, some granola bars and chips. It’s as good a start as any for a girl hitting the reset button on her life.
Probably should have been smarter about this whole thing in the first place, but I was never much of a planner. If I’d tried, I probably would have messed up and left my purse on the train or something anyway. I sling the bag over my shoulder.
I feel a little bad about leaving without telling Phoenix, but I know he’d talk me out of it if he was around, and that would only stop me from finding the life I’m meant for. This apparently isn’t it.
Should have known. The first guy who helps me when I get out of Fallen Pines isn’t necessarily my destiny. Even if it kind of felt like he was for a little while.
TOUR SCHEDULE
Goodreads * Amazon

About the author:
Romy Lockhart writes paranormal reverse harem and M/F contemporary romance. All of her books contain steamy scenes between consenting adults. All of her reverse harems have harem ever afters, and all of her romance novels have happy endings.
Website * Goodreads * Facebook * FB Group * Twitter * Bookbub * Amazon
Author's Giveaway
a Rafflecopter giveaway