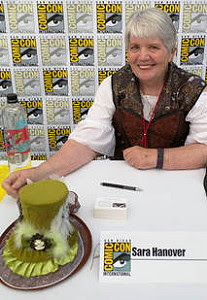 Photo Content from Sara Hanover
Sara Hanover lives with a hoard of books, rather like a dragon, and works on improving her imagination daily. She loves plot twists and cats, family and crispy autumn leaves, traveling and good food. She thanks her parents for supporting her first efforts in writing, and her husband for continuing to encourage her, along with the many good people at DAW Books. 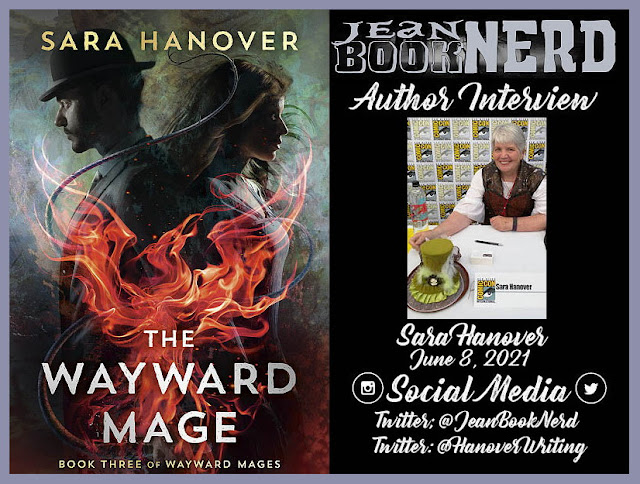 Greatest thing you learned at school.
I learned how to find answers to questions, and how to ask questions no one else had.

When/how did you realize you had a creative dream or calling to fulfill?
I can remember walking around with a pad and pencil in my very very early school years, trying to write sentences, and then stories. My mother was also a writer, mainly nonfiction, and she taught me to love reading and writing.

What was the single worst distraction that kept you from writing this book?
The pandemic that seemed as though it would be endless and is still lingering today. How to fit it into the book? How would it change any fiction I could ever write in 2020? I decided to put this novel in the months just before, when the first few hints of something going terribly wrong were still vague.

Has reading a book ever changed your life? Which one and why, if yes?
Andre Norton’s Star Man’s Son. My mother brought it to me and said, “Andre Norton is a pen name for a woman. She can write and publish SF, and so can you.”

Why is storytelling so important for all of us?
Most of us have creative souls. Storytelling is both wishcraft and oral history.

Can you tell us when you started THE WAYWARD MAGE, how that came about?
The MAGE came on the heels of the first two in the series, and my characters were demanding an ending.

What was the most surprising thing you learned in creating your characters?
I had two characters who absolutely refused to die in any of the books. So I held onto them tightly.

Your Favorite Quotes/Scenes from THE WAYWARD MAGE
“Magic has a price and when it comes to take its due, it can be fairly messy. It’s not pretty. Don’t ever believe it is. It is the stuff of blood, sweat, and tears. Add a little cursing—but that will lead you into the dark side. Avoid that, if possible. Because the price is high enough as it is. I lost a father…and gained a family I never expected.”
This is part of the set up of the difficulties my MC Tessa has dealing with her new reality.

Random Fact about THE WAYWARD MAGE
Although the story is set in and around Richmond, Virginia, I did not dip into the Civil War background. Certain of my characters are much older than that and their circumstances are rooted in the Revolutionary War, very deep roots.

Meet the Characters
Like some writers, I have often real people that fit my image.

Tessa is a young, 20 year old Jennifer Garner (the actor). She is tall, willowy, athletic, with a deeply ingrained sense of justice and brashness. She has a certain physicality. She plays field hockey in college. She is also carrying the burden of having driven her father away, and possibly into a magical limbo from which he cannot return.
Quote: “Having Magic would be awesome, if only there weren’t people willing to kill me for it.”
Simon Steptoe, the local lesser demon, looks like actor Mark Shepherd (from Leverage and Supernatural). He has an English wit and sensibilities and is working on reforming his nature, but he’s a bit of a wild card. He’s astonished to find himself accepted as family by Tessa and her mother Mary.
Quote: Simon approached the table, tugging on his suit coat to make himself absolutely presentable. He looked like a chimney sweep, regardless, dark old-fashioned clothing and often a bowler hat. “That smells fabulous, ducks. Which one made it?” His tail twitched from side to side, rather like a cat approving of the sensory information about him.
Carter returned from the Middle East young, battle-scarred, made a reluctant hero, and with a magical transformation. He is tall, easy-going, rather plain in the face (but earnest), with a scar that looks like an out of place cleft. He carries an immense amount of magical energy that is exceeded only by his love for Tessa.
Quote: I wondered if I should drag Carter into our family disagreement, before deciding on the negative. We’d sort this out together, if we still had a together. “Nothing. Everything is fine.”
“Fine,” he repeated. “That’s one of those trigger words, isn’t it?”
The Professor is a phoenix wizard and has lived for centuries, learning magic and regenerating himself when physically necessary. Tessa helped him do so in books one and two, then he disappeared. When he does return, it is in the nick of time…or is it?
Quote: Havoc broke out. Gregory reached for my mother’s elbow and turned her aside slightly and she managed a small smile. “Did you think I wouldn’t know?”
“Madam,” he said solemnly, “you and yours have always happily surprised me.”

Evelyn is Tessa’s closest friend. She most physically reminds me of classic Lisa Kudrow from Friends. They started out as frenemies but grew beyond that. She is extremely slim, blonde haired, from a wealthy family but has her own keen sense of justice. Also, she just might be developing magical powers of her own…
Quote: I didn’t have time because Evelyn stopped all motion and stood stiff and quiet for a long moment. She half-turned then and looked at me with her eyes very wide. “Change is coming. An unimaginable disaster for the nation. We will not meet again for many months without risking our lives. This will be one of the hardest trials our country, our world, will ever face. Remember.”
And then there is Malender. Extremely sexy. I’ll let this quote describe and speak for him: “Stand,” commanded Malender, “for you are filled with crimes unbowed to justice. That is my job and I will have it.” His declaration sounded overly formal, but then Hiram must have called him in to deal with a guilty verdict. The scourge (a whip of flames and thorns) coiled about his booted feet, its orange glow reflected like small suns on his black leather pants, his shirt opened at his throat, and his wavy hair seemed slightly blown back from his face from a wind that did not touch me. His presence filled me with fear that I had not felt around him for seasons.
Writing: Behind the Scenes (Anything to do with your own personal art process: habits/quirks, research process, inspiration, choosing names & settings, etc.)
I don’t wait for a muse. Writing is best accomplished when I write daily, even if only a little bit, and I succeed best when I’m doing 2000 words a day minimum. Because I have a large, extended family (and pets), time can be hard to find. I have my own room in the house and when I enter it, it’s generally agreed I am left on my own until I come out. Unless, of course, lunch or dinner is necessary. The cats are the only ones not afraid to interrupt me.
I scribble down names on scratch pads littered all over my desk. I make files for back story. I use file cards for partials on scenes (easily re-arranged). I do have a white board but it’s just sitting on the floor in the corner of my office. I keep meaning to hang it somewhere.
Thank goodness the internet is now so reliable for factual research. It wasn’t always and I wasted hours at the library. Now it’s all at my fingertips.

What is the first job you have had?
Despite my mother’s urging to take on babysitting, I actually worked in a small, local pet store.

What is your most memorable travel experience?
Seeing the Sydney Opera House first thing in the morning of our trip and knowing I had gotten there, and had explorations ahead of me!

What's your most missed memory?
The day my father surprised me by taking me to a quarter horse ranch. I love horses and have never been able to have one, or be near a stables. That day, I was let into the pasture and stood surrounded by mares and their curious foals, and it was heaven. My father died young but we were very close.

Have you ever stood up for someone you hardly knew?
I try to do that every day, particularly in my writing. Words have influence.

Which would you choose, true love with a guarantee of a heart break or have never loved before?
True love…been there, done the heart break.

When you looked in the mirror first thing this morning, what was the first thing you thought?
Seriously? I have a nasty bruise on my jawline due to a dental procedure, and I have to take an ID selfie sometime today. I dislike the idea of that bruise!

What do you usually think about right before falling asleep?
Some people count sheep. I divide my fantasy lotto winnings…who needs what and who gets how much that I can give them.

If you had to go back in time and change one thing, if you HAD to, even if you had “no regrets” what would it be?
I would change my second contract in writing. I might have had way more opportunity if I had stayed with a certain contract which I turned down. Don’t know.

First Love?
Donald Frazier. We moved and I left him behind. To this day, I still cursive write my “F’s like he did.

First Heartbreak?
The failure of my first marriage.

What event in your life would make a good movie?
Probably the massive Alaskan earthquake I was in, and the subsequent fleeing to high ground to avoid the tsunami as we lived near the coast, and below sea level. The third book in this contemporary fantasy series returns to the life of Tessa Andrews as she balances the magical and mundane worlds.

When her father disappeared into limbo years ago, Tessa's world fell apart. It took her discovery of magic for her to begin to put things back together. But she hasn't been able to restore her father from his ghostly half-existence--and he is fading fast.

Magic has a price, and Tessa is learning that it is both steep and deadly. The phoenix wizard who could train her has deserted Tessa. She has friends among the Iron dwarves and harpies, even a lesser demon, and the mysterious Malender with his sinister whip of thorns and fire. But she is still faced with a delicate balancing act.

Then her mother incurs the wrath of the magical world when she writes a dissertation exposing its reality. That is the final straw, as Magic fights back and an assassin accepts a contract on their lives. Tessa must learn to master her new powers as a sorceress, or everyone and everything she loves is doomed.
You can purchase The Wayward Mage at the following Retailers: 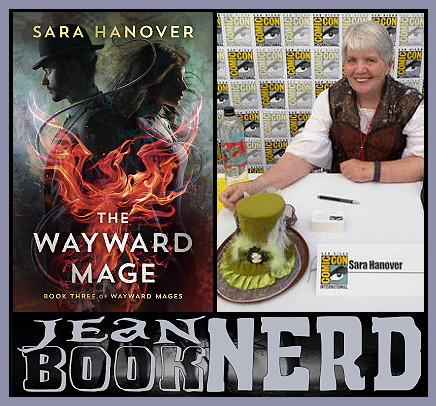