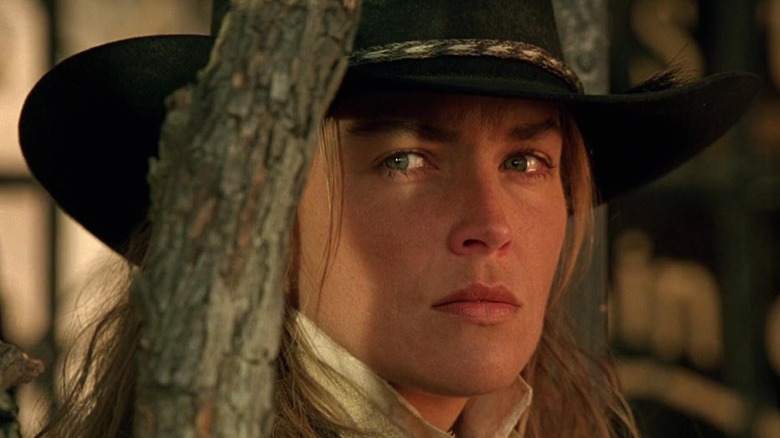 Right from the first scene of 1995's "The Quick and the Dead," director Sam Raimi makes it clear that he's playfully toying with his audience.

We open on a quintessential Western image: a lone figure atop a horse, galloping through a barren landscape towards the distant camera. The title card "Russell Crowe" floats just underneath the approaching rider, tacitly implying that the actor (who would later go on to make even more use of his rugged, gunslinger looks in "3:10 to Yuma") and the cowboy in the shot are one and the same. As the lens continues to pull back, our focus shifts to the frantic digger in the foreground, searching for apparently misplaced gold. Once alerted by the neighing of the horse, Tobin Bell's disheveled outlaw Dog Kelly comically springs into view, sets the unwanted intruder in his gunsights, and promptly pulls the trigger. By now, we know exactly what's coming. He carefully prods the fallen body, goes to turn over the face of his vanquished foe, and gets an incapacitating rifle butt to the face for his trouble.

Framed from below with the blistering high noon sun behind (and a pinprick of light streaming through the visible bullet hole — a clean miss — in the brim of the hat), we get our first good look at the assailant looming over her would-be killer: Sharon Stone's Ellen, who simply goes by the title "Lady" for much of the runtime.

In the span of just a little over 3 minutes, Raimi (from a script by Simon Moore) packs these opening moments with several of his usual trademarks: an ever-roving camera drinking in its surroundings, extreme close-ups putting us uncomfortably close to his characters, and a winking sense of humor that doesn't so much as "elevate" this nifty little Western, but seamlessly fits in among the ranks of classics that the filmmaker undoubtedly grew up watching. Sam Raimi may be making his grand return to the superhero scene with "Doctor Strange in the Multiverse of Madness" this week, but "The Quick and the Dead" sets itself apart as living proof of just how well he operates under one of cinema's greatest-ever genres: the Western.

A Flair For The Dramatic 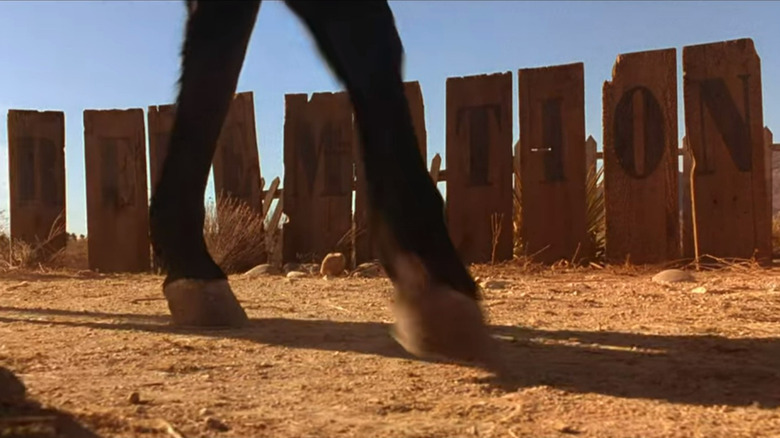 Sam Raimi spells it out for us (quite literally) from the start. Ellen purposefully strides past a ramshackle fence bearing the name of the dilapidated town that serves as the setting for the film and the chief inner conflict for our main heroes: Redemption, the kind of town that's "full of people who'll kill you for your bootlaces." Not too dissimilar from the showy, card-hustling cowboy Ace (Lance Henriksen) that Ellen encounters soon after, Raimi never shies away from laying all his cards on the table in "The Quick and the Dead."

Even with such gloriously on-the-nose visuals, what's truly impressive is how much we get to know about Sharon Stone's brooding and vengeance-driven cowboy in the early going through a steely gaze or the set of her jaw alone, without any dialogue. Well, almost no dialogue. After knocking out Dog Kelly and leaving him chained to a wagon axle, she trudges away and casually spits out a parting shot of "A**hole" ... probably in response to mistaking her for a man, just as much as for shooting her off her horse. Otherwise, Raimi lets quiet moments do all the talking, such as her mournful gazing at the wreckage of the Marshal's office on the outskirts of town (a detail that will become much more meaningful later on) or an insightful window into Ellen when she's able to let her guard down in the safety of her own hotel room, briefly sequestered from the exhausting outside world that's dominated by aggressive men and their expectations for her.

Even so, Ellen's decidedly not a role model and soon makes that clear to the barmaid's hero-worshipping daughter, awestruck by the idea of a woman wielding a gun. Later on, after successfully holding her own in the shootout competition that drives the bulk of the film, Ellen answers the young girl's adoring praise of "I think you're great!" with a brusque "Grow up." It's nothing personal and without any real malice (the two share some brief bonding moments elsewhere), unlike the nature of her incredibly personal motivations to make up for her own past failings by taking down the fear-mongering, power-hungry villain of the picture: Gene Hackman's John Herod. 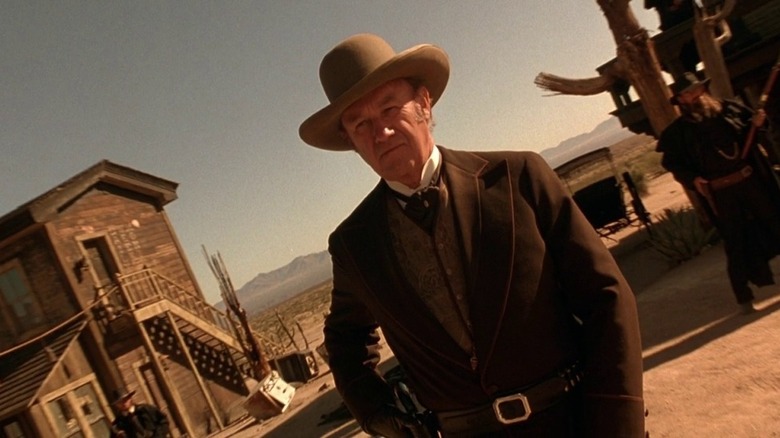 The scene that (re)introduces Ellen to Herod (along with the rest of the film's ensemble) serves as yet another representative example of everything Raimi brings to the table.

Other than her begrudgingly charmed reaction to Fee "The Kid" Herod's (Leonardo DiCaprio) cocky attempts to get in her pants (which eventually works, amusingly enough!), Ellen is content to sit far away from the spotlight and quietly observe a saloon full of obnoxious cowboys tripping over themselves to prove their machismo with the deadly shootout game — that is, until Herod arrives and drags in the outlaw-turned-preacher Cort (Crowe) in chains. Here, Raimi and cinematographer Dante Spinotti let their inventive camerawork tell the story: a whizzing point-of-view angle of Herod throwing a glass of water at Cort's face, a split diopter shot (one of many judiciously sprinkled throughout the film) holding both Ellen and Cort in focus within the same frame as the latter is strung up to hang, and one impeccably choreographed sequence that gives the illusion of the camera whip-panning from Herod's gun barrel to Cort's face, down to his feet grasping for purchase on a wobbly chair, back to Herod's pistol again, and neatly racking focus to a horrified Ellen watching this unfold in the background. She finally joins the action by shooting the hangman's rope and saving Cort to prove her marksmanship — another key detail that will take on new meaning later.

By the time we get to the classic Raimi dolly-zooms and close-ups prevalent in the thrilling shootout scenes, the visual language of "The Quick and the Dead" has been firmly established as one that purposefully brings a spotlight to the artifice. Those wishing to lose themselves in the plot and characters are forcefully reminded at every turn that they're watching a gleefully self-aware movie — not in the same insufferable vein as "Deadpool," but spiritually akin to similar genre pictures like Martin Campbell's "The Mask of Zorro" or even Brian de Palma's "Femme Fatale." With Ellen, Cort, and even the dastardly Herod all boasting operatic, larger-than-life backstories that drive each of them on their own quests for redemption (or, in Herod's case, more exercises in cruelty), then why not reflect that in the actual filmmaking itself?

Form follows function in "The Quick and the Dead," even as our main characters barrel towards their inevitable conclusion.

The Woman Comes Around 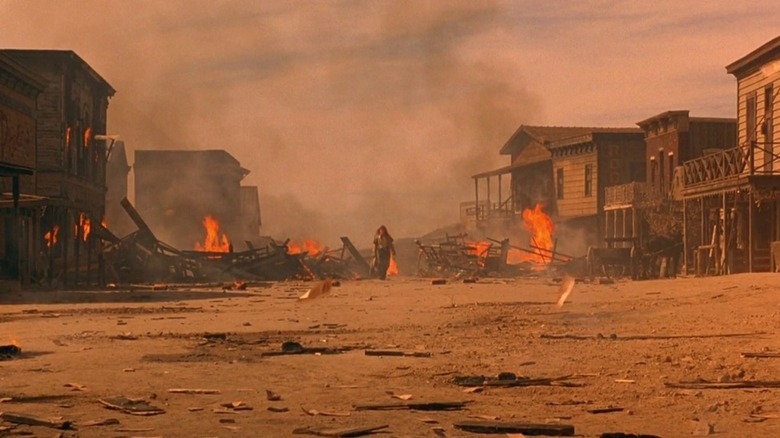 Sharon Stone's crucial involvement in helping to put "The Quick and the Dead" in the best possible position to succeed is the stuff of legend, paying out of her own pocket to provide Leonardo DiCaprio's salary in the role of Herod's disappointing son and even using her producer credit to help Sam Raimi get the job in the first place. Her character in the film is no less a force to be reckoned with, from the moment she first swings through the saloon doors until she rides out of town in a blaze of glory, having accomplished everything she set out to do.

As we learn through Ellen's tortured childhood flashbacks, a young Herod once strung up her father in a hangman's noose to make an example of him as the town's Marshal (Gary Sinise), the only lawman around. Ellen watches all this in horror until Herod goads her into a perverse little game of shooting her father down from the rope to save his life. She misses and accidentally kills him, setting herself on the traumatized path that ultimately leads her back to Redemption as a cold and hardened adult.

Yet Ellen is far from Herod's only victim. Cort details his own backstory when he used to ride with the outlaw and look up to him. That all changed once he was also forced into an impossible situation: after a bank heist gone wrong, Cort is ordered to kill the priest who sheltered them from the authorities. In a desperate search for atonement, Cort retreats to a life as a humble preacher — though this doesn't last long, as Herod sends his men to burn down his mission and haul him back to face Herod's final judgment.

As these interweaving threads crescendo in the film's show-stopping shootout sequences, ultimately ending with the Kid tragically killed at his father's hand and Ellen's shootout with Cort ending in her seeming death, Raimi has one more trick left up his sleeve. Ellen's "resurrection" (which plays into the Biblical origins of the movie's title, as well as the name of its antagonist) ends Herod's reign of terror in fire and brimstone ... and one last duel that concludes with his gloriously over-the-top death.

Marvel fans who are about to get reacquainted with Raimi's superhero showmanship would be well-served to check out the Western that did it all first.

Read this next: 12 Shows Like Stranger Things You Definitely Need To Stream