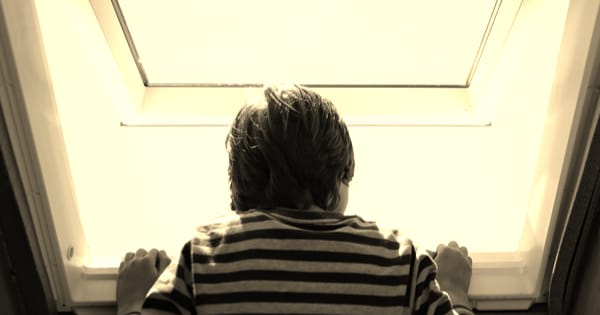 What goes up must come down.

Oh yeah? Today I learned about how a cat climbs a tree easily and could probably come down easily but looks how far down down is and turns into a first-class chicken cat.

Which reminds me I also dont have claws, and fingers trying to hold on to shingleson the edge of a dropnot good to think about, either.

I should of thought

Yes, plenty of time to think now that it doesnt do me any good.

Odd how nobody comes out to play on Sundays, we have our big meal at noon after church and popcorn and slices of apple, sometimes bread-and-milk for supper and watch Ed Sullivan or Jack Bennydoes everybody on the block do the same? But this is Saturday, not Sunday, and its like the whole town is deserted, youd think somebody would be somewhere I could wave at.

A hour ago (it must be a hour!) there was Benny and his new high-top tennis shoes under Mrs. Geisters weeping willow. He thought nobody could see him since he couldnt see out, but those white shoes! Who could miss em?

I see you, Benny!

I called twice more, he still wouldnt move. I wasnt gonna crawl in there to tag him, serve him right if he never came out, his mother had to call the cops or something.

Nicholas was easy to spot too, once I went down the block two houses. Between houses, grinning like a goofball, but Nicholas is fast. I already chased him halfway down the block and didnt come close. Fast, and only gets caught if he gives in and lets you.

But that was over a hour ago and they must have decided to stop playing and go home and not tell me because they couldnt find me to tell me and I dont think they really looked.

Benny was it, I bet he heard me on the garage stairs and hes too afraid to come into my garage in case I jump out and scare him.

I bet they both just went home.

Oh boyI didnt wonder for a second about how I was gonna get down, it was such a challenge to see if I could get up, and I did and here I am, sitting on the roof and my legs are aching like cowboys legs ache from riding a horse except the peak of a roof is worse, sharper, and shingles are rough even though your pants.

But see, I came up the stairs (my garage has a stairs!) and opened the window and climbed up on the windows sill keeping ahold of the edge of the roof its so close to the window, and got my one knee on the roof and scrunched and scooted and rolled right on the roof all of me.

I knew I could do it, Ive never done it before.

But then I didnt go to the front of the peak where I could see them because they could see me until I waited a minute and thought about it was unfair to stay out of their sight unless they were across the street or in Mrs. Geisters bedroom window or in a low-flying plane. Waited and when I finally got to the front they were gone.

Its what I get for being so sneaky and daring. Theyd never expect me to be up here.

I think its possible to be so clever youre really not clever at all.

Its a game. The three of us were having fun. A Saturday afternoon so we had hours before dinnertime, taking turns being it, the Free Tree by Bennys house, and they were agreeing, they let me make new rules like Wherever you hide you have to be visible. Which I cant explain because it was Hide-n-Seek, like telling them we should hide but stick out and be easy to spot.

But Im nine and theyre younger and anything I say they nod as if it makes perfect sense. See, older equals wiser and someday theyd understandha! Ha! Even if I didnt know what I meant I was the leader, I had the neatest garage with an upstairs room, they had nobody else but girls to play with.

Im not the only one who makes mistakes though, who thinks theyre so clever and miscalculates stuff. We have a banana cake right now (in the refrigerator to keep from spoiling) that nobodyll eat, not even Dad.

My mothers banana cake is usually gone by the second day, Gary wolfs it down, my father cuts the pieces, big pieces, for everybody first and then says, Oh, Ill just have a little piece, and he does and then (just watch him) he starts shaving slivers and corners away and eating more little pieces until the cake that remains looks neatened-up to him. Two days and gone, three days at the most.

But see, my mother took a cake decorating class at the high school. Fancy edges, flowers, lettering. And she had about a dozen little jars of different colored frosting left and she didnt want them to spoil, she didnt want to waste them, so this time instead of white frosting she combined all the colors thinking frosting is just frosting but she made us all eat a piece to prove it tasted the same but nobody wants seconds, nobody wants more, nobody can eat cake with frosting the color of dark wet cement.

Its sort of purple, she claims.

Its sort of awful.

And a month ago she was making chicken-and-dumplings from leftover chicken and it was too runny, she grabbed the yellow-orange box of something called corn starch and threw a spoonful in and saw it start bubbling

I never saw it bubble before!

To find out shed grabbed the box of baking soda by accident.

I dont want to throw it outcome on, I washed it, I washed it three times, you can almost not taste

I had peanut butter and jelly, Gary brought out the cookie jar, only my father ate it, making funny faces with each bite.

And now I wish I hadnt tried to be so clever at all.

But theres a sidewalk right there, not soft grass to land on.

Otherwise all I can do is wait for my dad to come home or my brother to come out the back dooror my mothersomebody to go get the ladder.

Oh boy, whyd I ever think I was so clever?

The post Its Lonely at the Top appeared first on The Good Men Project.