The freest feeling setup for sport and competition climbing.

Mammut released the original Realization Shorts in 2013, and like many climbers, I scoffed. “Is there really a need for this? Is this better in any way?”

Essentially shorts with a built-in harness, the Mammut Realization Shorts presented a super niche product. It seemed unnecessary and gimmicky. Sport climbing harnesses have advanced to be super lightweight while remaining comfortable, and I can take them off without changing pants. I just didn’t get it.

I have been testing both the original Realization short and the 2.0 version, launched last spring, for a full year. And, like the shorts, my thoughts have evolved. They do indeed have a place in sport or competition climbing where they perform incredibly well.

In short: The Mammut Realization Shorts 2.0 provide a freer feeling for the gymnastic movements of sport and competition climbing. But its upsides, utility, and comfort on belay or arresting falls, come with a premium price. 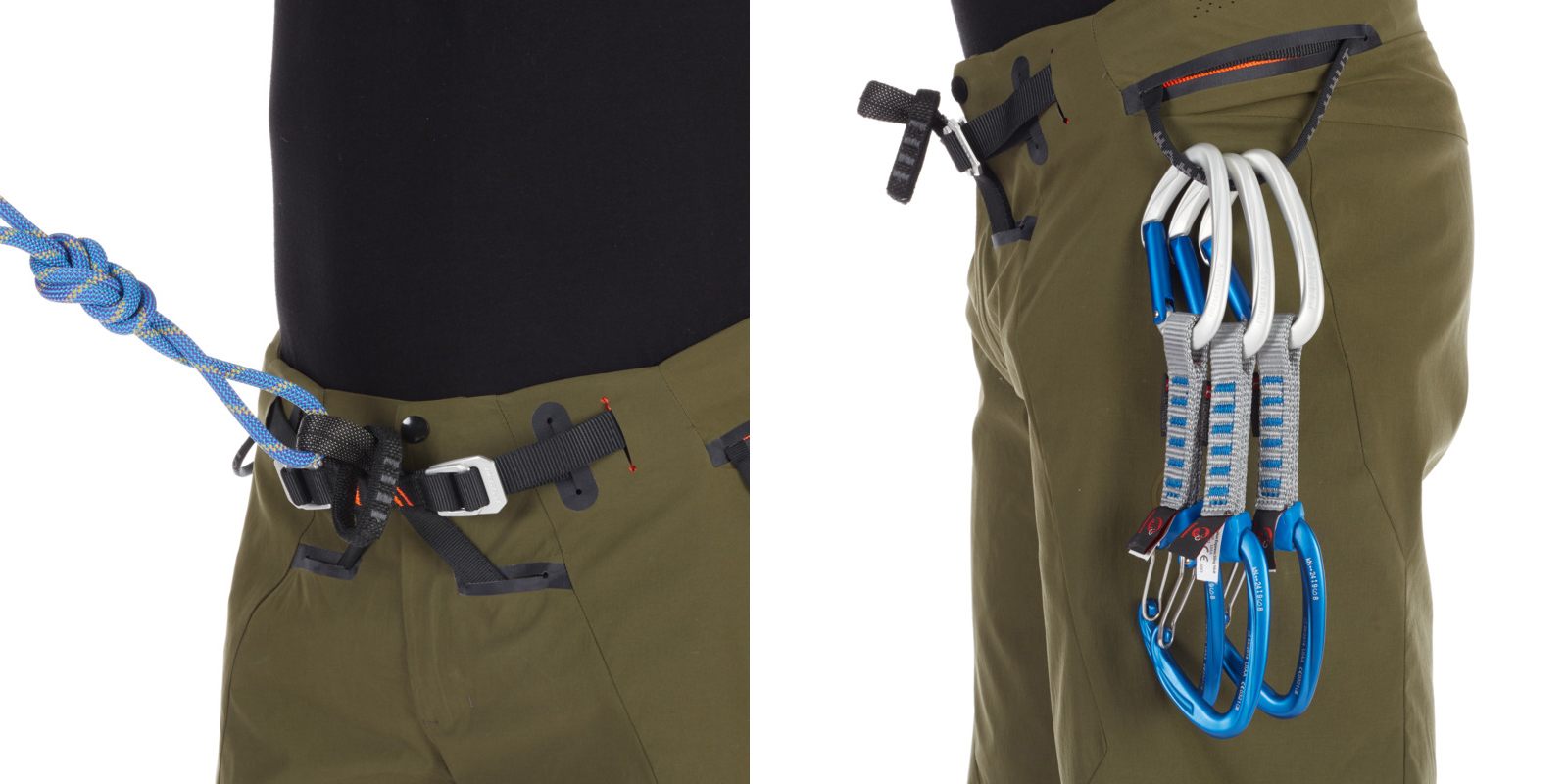 Pulling on the Realization Shorts felt more like pulling on a harness than shorts. I had to fish my legs through internal leg loops and squirm through the waist belt. But once I zipped up the standard fly and snap closure, then tightened the dual opposing pre-threaded harness buckles, I soon forgot I was wearing an EN and UIAA certified rock climbing harness.

The non-adjustable leg loops and waist circumference felt on the money for my 22.5-inch thighs and 32-inch waist. And I had plenty of tails remaining on the waist adjustments.

The fabric of the shorts felt breathable, light, and stretchy, as did the drop liner. A gusseted crotch and vented lower back section rounds out the build. If the harness weren’t in the shorts, they would still be a top pick for sport climbing on hotter days.

Initially, I could feel both the waist belt and leg loops of the internal harness, but soon the sensation disappeared unless I intentionally thought about it.

So, are they lighter? The target audience for the Realization Shorts surely wants to know.

The verified weight of the size medium Realization Shorts 2.0 is 1 pound. My standard warm weather combination of an Edelrid Ace harness and Mammut Crashiano shorts comes in at the same weight. So, at least for me, no weight savings. 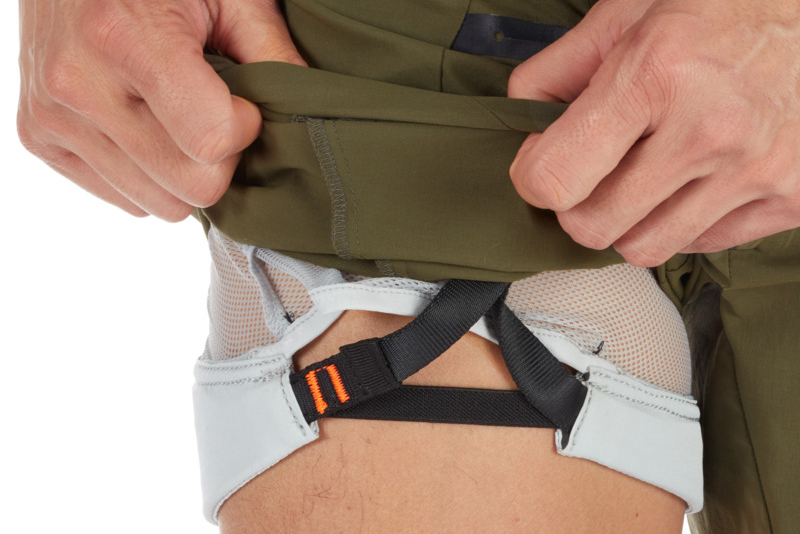 Prior to climbing in the Realization Shorts 2.0, I never noticed my harness hindering me while on the route. I may have noted its shortcomings while hanging or during a lead fall, but with the higher-end harnesses that I am fortunate to test, these instances were rare.

But, wearing the Realization Shorts 2.0 changed that. Going climbing on back-to-back days, once in the shorts and once with a standard harness, revealed the free feeling of Mammut’s hybrid product. I felt unencumbered, like I was climbing in shorts alone.

Wide stems, high stepping, extreme twisting, and other body contortions felt unhindered. My shorts didn’t have to slide under leg loops, and I didn’t feel the waist belt twisting around me as much. But honestly, I wouldn’t have noticed this without back-to-back comparison.

Where I saw the most performance improvement was when the Realization Shorts were loaded in a fall, while hanging, or while belaying. The pressure transferred through the surface area of the waist belt and the leg loops felt more spread out. The amount of force distributed to the shorts had to be relatively small, with the sensation more significant than the reality, but it was definitely there.

As for the rack, the pair of gear loops were always where I expected them to be for sport climbing. They had a satisfying stiffness that kept me from noticing them while removing or replacing quickdraws.

On the apparel side, I wore the Realization Shorts 2.0 for four hot, humid days of cragging and didn’t notice any odors. But I did see soiling caused by chalk mixing with sweat. Washing them wasn’t anything out of the ordinary, though I wonder how many washings the Realization Shorts 2.0 can handle over their usable life. If you are the type of person that avoids washing harnesses and ropes for fear of potential damage, this would be a concern.

There were a few peculiarities associated with climbing in the Realization Shorts 2.0. First, they’re curiously devoid of any way to directly attach a chalk bag, preventing them from having the total package.

But that wasn’t all. Tying into a single point caused an initial mental hiccup. I had to remind myself that the tie-in point is fully rated and that it wasn’t any different than trusting a standard belay loop to catch falls. This mental blip only occurred while tying in for the first time each day. The same thing happened while putting my partner on belay for the first time each day — the small belay loop only goes through the single tie in point. 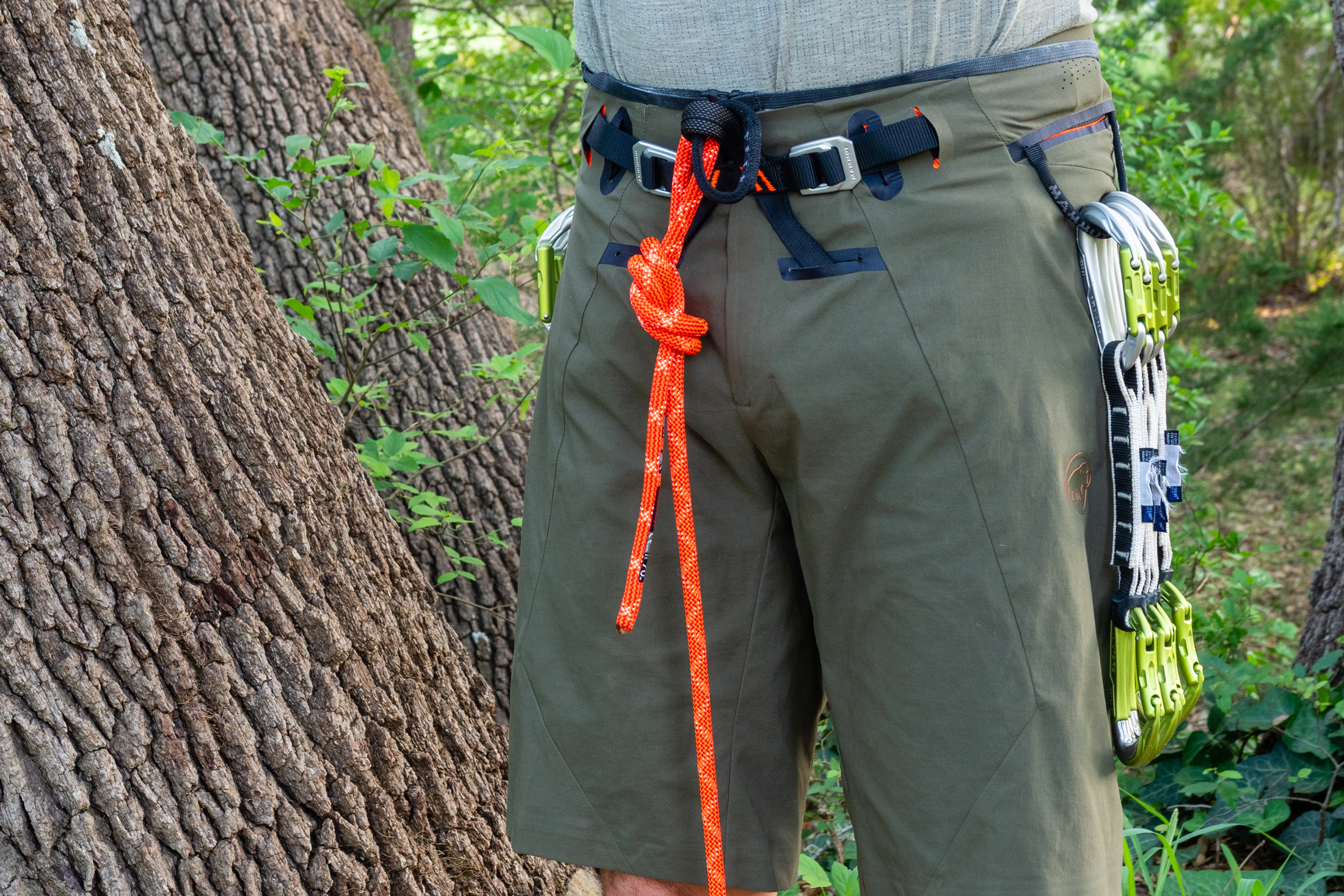 The Realization Shorts 2.0 also generated enquiring looks, both while climbing and while on belay duty. People would question what I was doing, and my standard “They are shorts with a built-in harness” reply universally elicited even more curiosity.

Finally, there is simply a lack of pockets. This omission wasn’t an issue while cragging, only when going to and coming from climbing. Having no pockets was a slight annoyance when hitting the pub afterward.

Although it may be attractive to the sport or competition climber looking for every potential advantage, I see the hybridization being more useful in adventure climbing. Big wall climbing, alpine climbing, and mountaineering seem like pursuits that would benefit more from the harness-in-pants design.