REVIEW – Fox Knives Radica folding knife is now the most expensive knife I own. But is it the best? And are you persuaded to get one?

The Fox ‘Radica’ knife is a folder with 2.76” blade and tuja briarwood handles.

What’s in the box

The sheath is designed to hang on the belt at about a 40 degree cant. So the sheath opening is either aiming behind you (assuming you put it on your right hip), or if you reverse it on your belt, it is aiming at a 40 degree angle towards the front of you at the floor. Some people carry knife sheaths aiming down so that isn’t so strange.  I just don’t get the angled sheath carry position.  If it has an advantage it isn’t specified on the company’s website.

Pretty straightforward for a knife. Open fully until the locking mechanism clicks, then use. The Radica doesn’t have any oily coating so I saw no need to clean it before putting it in its sheath and on my belt.

You might enjoy the Gallantry webpage. It shows proper terminology for knife parts.

The thumb stud was loose and rattling when I handled the box. I tightened it by hand and it hasn’t come loose again. 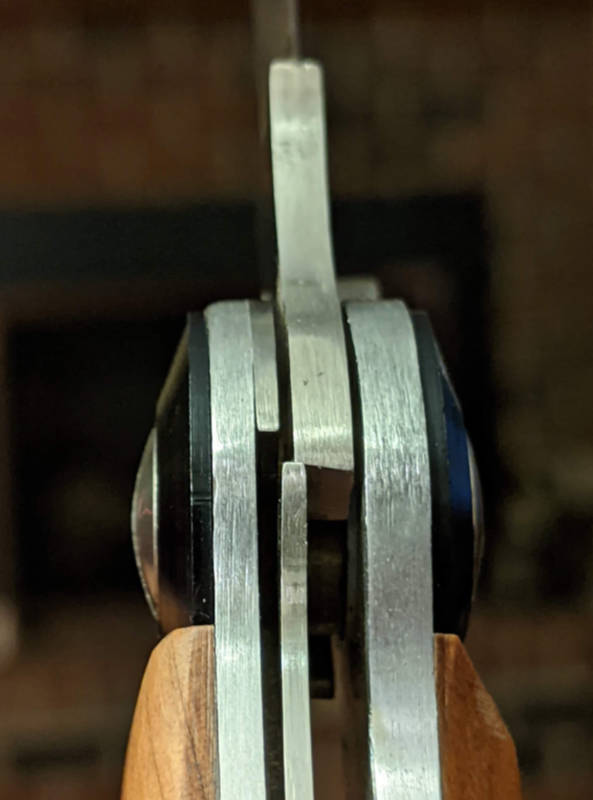 The blade was a bit tight at first. I wasn’t sure the locking mechanism was getting enough purchase to ensure safe use of the knife when the blade was open. After 10-15 openings, more of the mechanism properly locked the blade in place. 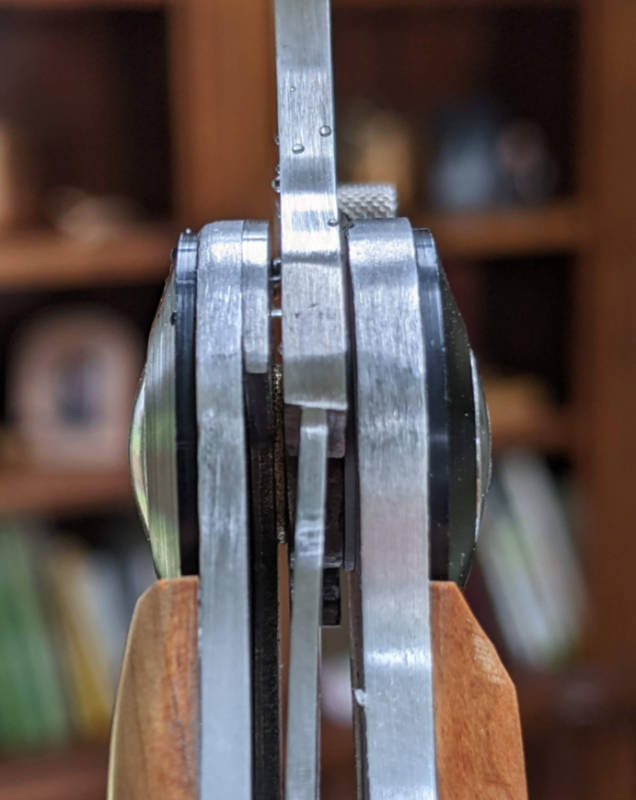 On day two I opened the blade to about 45 degrees with the thumb stud, then wrist-flicked it fully open. I thought I’d never get it closed. The locking spring had come to rest so far into the blade I had a very hard time releasing the lock so that I could close the blade. As the knife broke-in over a few days this problem went away but I quit flicking the knife open and preferred to swing it open more casually. 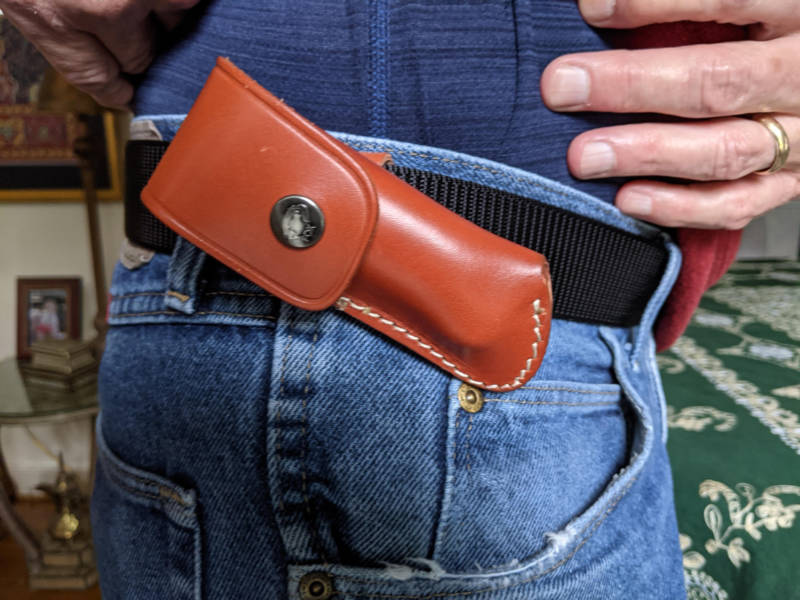 The Radica is a sheath knife. It is not comfortable for me to carry loose in a pocket. You may be fine with a bulky knife in a pants pocket but I already have a pen, flashlight, glasses cloth and ear plugs in there so a thick knife isn’t too welcome. I appreciated the inclusion of the leather sheath.

I’m not sure of the logic of how the sheath is designed to hang. It would be easier to remove the knife from the sheath if it were perpendicular to the belt, upright, as most sheaths are oriented. I tried reversing the sheath and that is an even less convenient carry method for me. The knife was not easy to remove when angled slightly at the ground and it was backward in the hand.

For a leftie, this sheath orientation would be perfect.  It would have a slight cant to the front if worn on the left hip. But I’m a rightie.

I found some of the knife’s metal angles to be sharp and that gave the impression of the knife not being properly finished. The knife back (the blade part opposite the sharp edge) has that sharp edge feeling as do the edges of the liners at the spine (palm position when holding the knife). Even a $35 Gerber knife is usually somewhat smoothed and rounded at the blade back and spine. 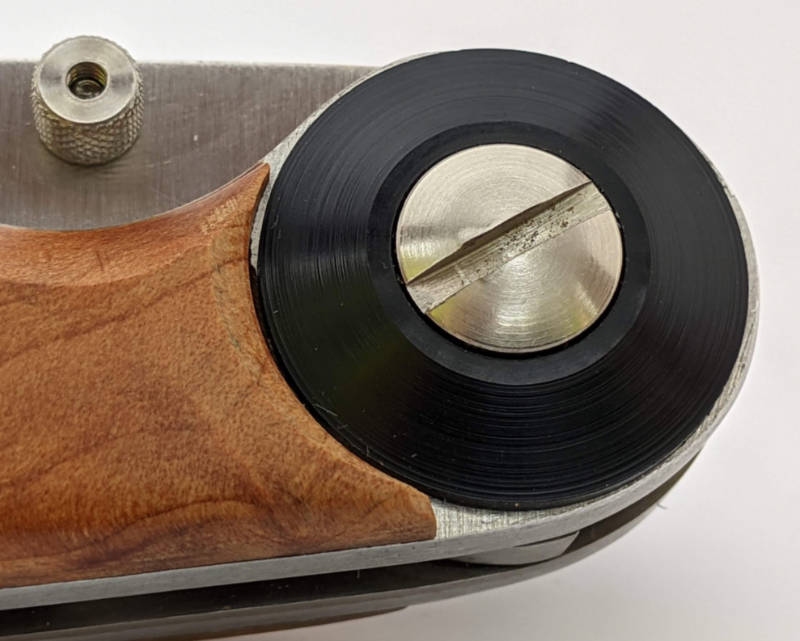 The screw on one side of the knife appeared to be marred in the way I’ve done to screws when I use a too small driver on a large screw.  These were several surprising findings for a knife at this price.

The blade was sharp and cut paper slices right out of the box. I carried the Radica during my testing whenever I was in casual clothes.

I used the knife to cut tough ¼” plastic wire ties and there was no deformation of the blade edge. Later I cut open a plastic bag of birdseed and the knife cut the plastic smoothly without catching. I don’t cut boxes open with good knives but I sliced pieces of rubber material, cut cord, cut tags off clothes, and did some minor scraping on a plastic surface. There were no performance failures. As Doug Marcaida of ‘Forged in Fire’ says, “This knife will cut.”

The Fox Radica folding knife is solidly built and seems to hold its edge well. The briarwood handle has a unique and attractive appearance. Does the look, feel and features draw you to the Fox Radica?

Price: $143
Where to buy: Bespoke Post
Source: The sample for this review was provided by Bespoke Post.

Fox Knives Radica folding knife review originally appeared on The Gadgeteer on June 7, 2021 at 9:00 am.

Note: If you are subscribed to this feed through FeedBurner, please switch to our native feed URL http://the-gadgeteer.com/feed/ in order to ensure continuous delivery.