Adelaide author Stephen Orr’s latest novel is autobiographical, set in suburban Australia in the 1980s where a young boy struggles to make sense of the world and figure out what he wants to do with his life.

Clem Whelan, young narrator of This Excellent Machine, is still at school but not interested in matriculating. He could be a mechanic, like his Pop, who is facing the onset of dementia. Or perhaps a writer – “a novelist, like Dickens”.

Whatever he decides, 1984 – a year marked by a succession of failed driving tests, Pop’s quest to follow a map and find a mythical reef of gold, and the return of an old neighbour – is destined to see him emerge as a different person.

DESPITE not having been to the races for years, Pop seemed more concerned about the dollar coin. ‘How the hell are you meant to hold on to it?’ A note was real, reliable, big; a coin was small, annoying, easily lost under Don’s freezer. He placed the coins in his pocket. ‘Enough to pull yer pants down.’

Mum laughed. ‘I can just see ’em down round yer ankles.’

Everything was changing, too quickly. The national anthem – a disgrace, Pop had said, the first time he’d heard it, sitting watching the news. Girt by sea. ‘What the fuck’s that mean?’

‘Stupid. Everyone likes a bit of a sing-song for the Queen.’

On and on. Green and gold, who made them our national colours? Bob Hawke? A piss-head for Prime Minister. At least Lanark Avenue stayed the same. Everyone too poor to move out.

Mum studied the form. ‘Six dollars a win. What about Lustre Man? Cahill’s a good jockey, isn’t he?’

‘No. Latin Hero. Chondra, perhaps. Six-fifty a win, two-twenty a place. What do you think?’

So he took the form, and studied it.

I watched the jockeys getting ready, saddling their horses, mounting, prancing about. I, and we, hadn’t been to the races for years. Pop had hinted, but Mum had always been too busy. Then, ‘What d’you say we go tomorrow, Dad?’

Which was his way of saying absolutely. The races had been a habit, but Nan had broken him of that, too. He’d had a part-share in a horse (Tonto’s Pride, the photo still hanging in his room beside Skeffington), but it’d broken a leg. He often told me about it: him and a mate watching from the grandstand, the fall, the sheet, the little pop of the rifle, and all his racing dreams finished.

The gate opened and the horses were led out. Pop had itchy fingers and a pocket full of coins. He said to Mum, ‘Ten bucks, what d’you reckon?’

Because that’s why she’d brought him: for the memories (of losing, even). He turned to me and said, ‘Carn.’

We walked past old men in tweedy jackets, club ties and braces, yellow-tipped fingers and glowing rollies. Wives, of course, studying the hatched, matched, dispatched, and celebrity photos, before taking up their knitting. A few kids, but most of them were in the compound, running around the betting ring, picking up handfuls of stubs and throwing them at each other.

Pop stood in front of Clarry Grimshaw and studied the odds.

‘If you win, you could save us the trip north,’ I said.

‘But yer right, a bita cash would come in useful. We could buy a Commodore. V8. Be there in no time.’ But he stuck to the ponies. ‘Right, what’d I say?’

He got Grimshaw’s attention, and gave him fifty dollars, for a place. 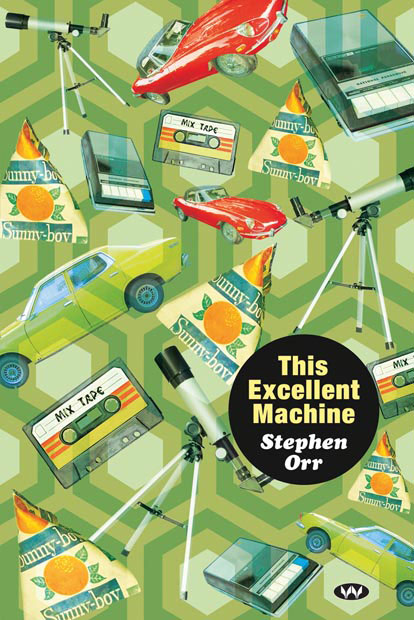 He led me to the bar: two schooners and a can of Coke. For the first time, he used dollar coins. As we headed back he said, ‘Was a time there’d be two thousand men here. Now, look, five hundred, perhaps. And the spirit’s gone out of the place.’

‘More for people to do these days.’

‘Less. Just more of it. That’s the way of the world. And don’t tell yer mother I put fifty bucks on her. Can you imagine? Say it was five, ten.’

He didn’t wait for me to agree, because he knew I would. Bonis omnia bona. It’d been years since he’d come to the races, and he’d done a shitload of good. So, now he’d cash in his ticket. That’s how it felt. And there was proof: Jen’s cards. She’d sat him down the previous evening, cleared his sahasrara chakra and selected the Sun (optimism), Magician (talent) and, of course, Wheel of Fortune (destiny). Put together, this could only mean one thing.

We returned and Mum said she didn’t want a schooner, she’d never liked beer, you know that, Dad, so he said, Clem can have it, and she said, He’s too young, and he said, What, a few months? He handed it to me and waited for me to drink it. Mum just gave me her don’t-you-dare look.

‘Stuckey, the Bishop, he owned racehorses, dozens of them. Then they made him bishop and people were saying he should sell them. But he wouldn’t. Every Sunday he’d get up and talk about the evils of money … but he had his own stable.’

I smelt it, tasted it, but Mum glared at me. It wouldn’t be my first. Me and Curtis, up the cubby house with a couple from Gary’s beer fridge. Nice and cold, with a smoke, and a shot of Anne’s brandy from a jar.

Pop wasn’t finished with the Catholics. ‘He had prostitutes.’

‘He did. His cook told the newspapers. She always saw them there. Some nights two at a time.’

It seemed like a decent story. When it came to Catholics, and the truth, you had to forgive him. I lifted the glass and Mum said, ‘Don’t you dare.’

‘We don’t need an alcoholic in the family.’

Pop finished his; took mine. ‘You can’t baby them, Fay.’

The horses waited for the starter. Lights, and they were off. Latin Hero sprinted, broke free, and within a few seconds had two lengths on Enduro.

‘Go, you beautiful thing,’ Pop said. The beer was spilling and Mum took it and drank it, looking at me as if to say, If this is what it takes.

Latin Hero was three lengths ahead, two, one, then back in the pack, but then surged, broke free again. Pop said, ‘See, what did I tell you?’

Mum leaned over and asked, ‘How much did he put on it?’

Cheers, and feet on the old floorboards. ‘Beautiful!’ Pop called, before sitting and saying, ‘I still got it.’

‘I backed it for a place.’ And he was off, down the steps, after his money.

‘Yes.’ She folded her arms, like it was a job well done. ‘He used to bring me when I was a kid. I’d just hang around the stables all day imagining I was Elizabeth Taylor.’

‘Na. He always had his dreams, and dramas. But nothin’ real.’

‘With Ernie. For all the stuff he goes on about, he’s happy to gamble.’

‘Val said you got rid of Dad.’

She sat staring at nothing. ‘I didn’t get rid of him.’ She drank the beer Pop had left. ‘There’s only so much you should put up with. But he wasn’t a bad man, Clem. I won’t have you thinkin’ that. Val didn’t say that?’

‘He was just easily led.’

The horses came back to the mounting yard.

‘He was still your father. Some just stick around longer than others. Look at Val, and Sid. One minute he was there …’

‘When was the last time you heard from him?’

But I was intruding, and she wasn’t willing. ‘Just don’t tell Jen. She likes things the way they are.’

I liked the races. If life was a backwards-walking chicken, and only you could see it, then you had to prove your faith. Hand over the cash, wait for your beastie to come good, and if it didn’t, continue to believe that tomorrow it would. I loved the smell of cheap cologne and talc and the way they made perfume out of body odour. The men, who hadn’t shaved since Friday morning, with gold garters on their shirt sleeves. And polished shoes, because the races were like church, and you had to look the part. The voices and placings and crappy music and some kid calling out for Simon to tell Mum that Dad was gonna be late, and the way you could hear and feel the horses’ weight through the earth, into the grandstand.

‘But that was before it broke its leg.’

Pop half-ran up the stairs. Damn it, I thought. There was gonna be more. ‘Bloody beautiful,’ he said, alive, glowing.

‘So, what did you make with yer ten dollars?’ Mum asked.

‘I invested the lot on the next race.’

‘It’s money in the bank.’ He showed her the form. ‘Classy Chloe. John Frew, trainer. He works his horses, and they win. Twelve-sixty a win, three-ninety a place, either way.’ He waited for us to declare him a genius, but Mum said, ‘How much did you win?’

‘Don’t worry about that. Just thinka the money. Coupla thousand of them gold coins.’

Pop said, ‘You never know – win or place. But if you wanna go back next Saturday?’

But Mum said, ‘Maybe it wasn’t such a good idea.’

This is an extract from This Excellent Machine, by Stephen Orr, which will be published in April by Wakefield Press. Orr’s last book, Incredible Floridas, was nominated for the 2019 International Dublin Literary Award.